Transylvania will leave the tourists in awe with its medieval fortifications, towers, bastions, bridges, stairs, narrow cobbled streets, squares, craftsmen buildings and churches. Maramures will impress with its superb wood craftsmanship displayed all over its traditional villages: houses, churches, gates, even in the "Merry Cemetery", a unique place. Bukovina will generate the peace of mind after visiting exterior frescos painted monasteries (World Heritage listed).

Cluj-Napoca, the spiritual heart of Transylvania, today one of Romania’s most dynamic cities which harmoniously combines the contemporary bustle with the secular heritage. Cluj-Napoca is definitely worth visiting for its excellent cultural activities, wonderful historical legacy, fine dining and great atmosphere.

Two hour walking tour through the center of the city, including visits to the main squares, monuments and churches, most of them representing the city’s landmarks: St Michael’s Gothic Church, Unification’s Square, Franciscan Monastery, Museum’s Square. Gothic, baroque, and neoclassical styles mix together and offer a special feeling in Transylvania’s medieval capital.

Turda Salt Mine is one of the oldest and most important salt mines in Transylvania, dating from the XVIIth century, an exquisite example of a salt mine transformation into a special facility with a modern approach. With over 2.000 years of history, Turda is among the oldest salt mines in the world. Nowadays a veritable museum of salt mining in Transylvania. It’s an amazing attraction, world’s largest salt mine museum, considered “The Coolest Underground Place on Earth” by Business Insider.

As “free Dacians”, we will keep taking care of everything that makes us happy or human. We will start with Sighetu Marmatiei, a small town in northern Romania hosting the impressive Memorial for the Communism and Resistance Victims, a place meant to “resuscitate the collective memory”.

Famous for its colorful wooden tombstones, depicting episodes of the villager lives in a naïve manner, the "Merry Cemetery" represents a genuine chronicle of the rural life. The Merry Cemetery, some call the second attraction of this kind in the world; but for us, it’s unique.

Next visit of the UNESCO-listed Desesti wooden church, one of the best preserved typical tall wooden churches in Maramures, XVIIIth century.

Pass through the picturesque Iza Valley, well worth visiting for the beautiful landscapes and villages.

We arrive at Barsana monastery (“Barsan” = Shepherd in Romanian) , to soak in the tranquility of the site; the old wooden church was built in 1711 by the noble priest Ioan Ștefanca, together with his sons and the other villagers, to thank God for the protection during The Great Plague one year before.  It is also one of the 8 Maramures churches on the UNESCO World Heritage list.

The tour continues by leaving Maramures for the Bukovina region, with scenic villages, traditional workshops and the famous painted monasteries.

Built in the XVIth century, it is one of the eight monasteries in Northern Moldavia with beautifully preserved frescoes painted on the outer and inner walls.

One day dedicated to the beautiful Bukovina region.

Voronet monastery, famous for its stunning and well preserved XVth-XVIth century vivid blue exterior frescoes, also named the Sistine Chapel of the Orient, and the monastery of Humor, one of the first painted Moldavian monasteries in the XVth century; both part of the UNESCO World Heritage.

Transfer to Marginea, a small village preserving a unique and beautiful tradition of producing black ceramics, craftsmanship dating from the XVth century; visit of a black pottery workshop. 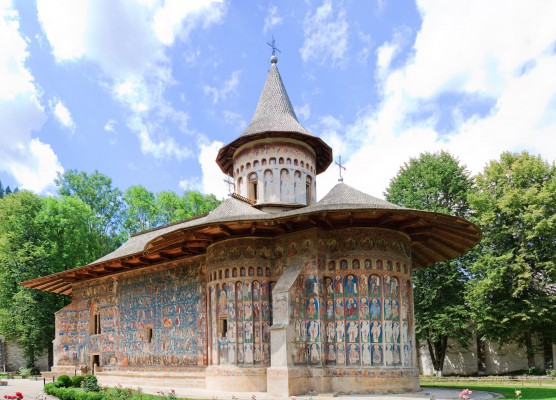 Departure from Suceava, transfer to Piatra Neamt, a “green urban island” near the mountains; then pass through the spectacular Bicaz Gorges, a narrow path carved into the sheer rocks, one of Romania’s most spectacular roads.

Optional, on our way, visit of the Neamt fortress, a XIVth century important medieval monument, and Agapia monastery, an Orthodox nunnery built in the XVIIth century, with its beautiful inside frescoes, created by Nicolae Grigorescu, the first founder of modern Romanian painting.

Transfer from Moldavia to Brasov, Transylvania; short city tour with the visit of the City Concil Square, the Black Church (Brasov's landmark, over 500 years old, the largest Gothic church in Transylvania, hosts one of the greatest pipe organs in Europe); Ecaterina's Gate, a fairy-looking medieval  tower, part of the last preserved original city gates.

Transfer to Sinaia mountain resort, the ”Pearl of the  Carpathians”, visit of the Peles Castle former residence of Romania's Kings. Built by King Carol I of Romania, as his summer residence, Peles Castle shelters an important collection of works of art, rare furniture and valuable paintings. Optional visit: Pelisor Castle.

In the afternoon - visit of the Bran Castle, known as the Dracula's Castle. The medieval stronghold perched on rocks high above the valley was built in the XIVth century, in order to protect the peasants and landowners at the border between the two historical provinces: Walachia and Transylvania.

Transfer from Brasov to Sighisoara.

You will have a really history lesson in Sighisoara (Schässburg in German) a small fortified city in the heart of Transylvania. It offers an outstanding testimony of the local Saxons culture. It’s also the best preserved medieval citadel in Romania and offers a genuine feeling of a medieval fortress. Explore the medieval city of Sighisoara, this well preserved fortified site, visiting: the Stag House, the Clock Tower, The Venetian House and more others.

We will continue our journey to Cluj-Napoca.