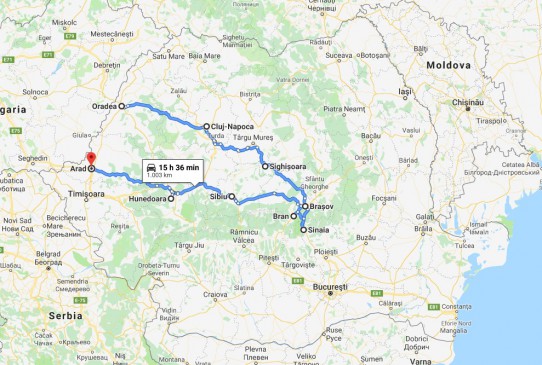 As you enter Romania continue your drive Oradea, then follow the signs to Cluj-Napoca, former capital of Transylvania, today one of Romania’s most vibrant and dynamic cities.

Optional: Private guided tour can be arranged. Two hour walking tour through the center of the city, including visits to the main squares, monuments and churches, most of them representing the city’s landmarks: St Michael’s Gothic Church, Unification’s Square, Franciscan Monastery, Museum’s Square. Gothic, baroque, and neoclassical styles mix together and offer a special feeling in Transylvania’s medieval capital.

The capital of Transylvania in the medieval times, Cluj-Napoca is today a vibrant city, sharing both traditional and progressive events; definitely worth visiting for its excellent cultural activities, wonderful historical legacy, fine dining, and great atmosphere.

.Leaving Cluj-Napoca for Sighisoara, small fortified city in the heart of Transylvania, visit of the well preserved fortified site: the Stag House, the Clock Tower, the Church on the Hill, the Venetian House and the Covered Stairs.

Sighisoara (Schässburg in German) is one of the most visited cities in Transylvania, and offers an outstanding testimony of the local Saxons culture.

The best preserved medieval citadel in Romania, Sighisoara offers a genuine feeling of a medieval fortress, one special feature is that its houses have been permanently inhabited.

Continuing the tour with Viscri village. Situated at 43 km from Sighisoara, Viscri is an oasis of tranquility, where Charles, Prince of Wales owns two traditional houses. The village hosts a spectacular fortified Saxon church, listed in the UNESCO cultural heritage.

Transfer to Brasov Transylvania; short city tour with the visit of the City Concil Squaer, the Black Church (Brasov's landmark, over 500 years old, the largest Gothic church in SE Europe, hosts one of the greatest pipe organs in Europe), Ecaterina's gate, a fairy-looking medieval  tower, part of the last preserved original city gates.

Brasov (Kronstadt in German, “Crown City”), surrounded on three sides by the mountains,  was founded by the Teutonic Knights in 1211 on an ancient Dacian (Romanian ancestors) site.

Drive to Sinaia mountain resort, the ”Pearl of the Carpathians”, visit of Peles Castle, former residence of Romania's Kings. Built by King Carol I of Romania, as his summer residence, Peles castle shelters an important collection of works of art, rare furniture and valuable paintings.

In the afternoon - visit of the Bran Castle, known as the Vlad Dracul/Dracula's Castle. The medieval stronghold perched on rocks high above the valley was built in the XIVth century, in order to protect the peasants and landowners at the border between the two historical provinces: Walachia and Transylvania.

Visit of the Sambata Monastery ("Brancoveanu" Monastery) a place of recovery, comfort and spirituality, built on Constantin Brancoveanu's order in an original Romanian style emerged in Walachia in XVIIth century. Brancoveanu was a Wallachian ruler who tried to strengthen the Orthodoxy during his reign.

The route between Brasov and Sibiu follows the majestic Fagaras Mountains ridge, the highest mountains in Romania; crossing several villages typical for Transylvania.

In the afternoon, the tour of the medieval center of Sibiu, one of Romania’s most charming cities: the Large Square with Brukenthal Palace, Haller House, the Catholic Church and the Council Tower - symbol of the city; the Small Square with Luxembourg House, the Liar's Bridge, the House of Arts; Huet Square with the Evangelical Church; the Fortress street; the Orthodox Cathedral.

Along with Luxembourg, Sibiu was designated European Capital of Culture in 2007, primarily due to the multiculturalism that defines it.

In the morning, get acquainted with the traditional folk architecture and popular techniques exposed in the picturesque open air "ASTRA" Museum, located in the forest of Dumbrava Sibiu.

Visit of Cisnadie (Heltau in German, 10 km far from Sibiu), with the Saxon fortified church St. Walpurga (XIIIth century), and then Cisnadioara (Michelsberg in German), with the Romanesque Church, representative monument for the Romanesque architecture in Transylvania, the oldest in Romania (1260).

*Optional: dinner with traditional menu and folk show in a rural pension, in Sibiel (22 km from Sibiu) - Glass Icon Museum, unique in Europe, over 700 exhibits

Short city tour with the visit of Alba Carolina fortress (Guard Changing Ceremony - every day at 12:00 pm), the Roman Catholic Church and the Reunification cathedral.

Transfer to Hunedoara, visit the Hunyad Castle (Corvin Castle) the most important Gothic style secular building in Transylvania. Even though the castle is built in Gothic style, it has also Baroque and Renaissance influences, and was the place where Vlad Dracul (commonly known as Dracula, courtesy of Bram Stoker's novel) was held prisoner for seven years.

The Hunyad Castle, a legacy of the Transylvanian Hunyadi dynasty, was included in the "10 most fascinating castles and palaces" list.

In the afternoon, visit of the center of Arad: the Orthodox Cathedral, the Administrative Palace, the National Theatre, Cenad Palace. Part of the Austro-Hungarian Empire until the end of World War I, Arad is a charming city, set on the Mures riverbanks, preserving a majestic atmosphere through its imposing architectural monuments.

Transfer to the Romanian-Hungarian border, Nadlac.

The prices are valid for a minimum 30 paying persons/group.

Not included services:
entrance fees
other services not mentioned